“The academy is working hard, day a day, over 20 years to achieve the best results”

JCFerrero-Equelite continues its good progression at the Master’s Cup. After a great match between Federer and Zverev, who has a good chance to get the semifinals, today is the turn of Pablo Carreño that is playing at 21h (Spanish time). Because of this great moment, we have had a chat with the founder of the academy and co-founder with Juan Carlos Ferrero, to whom trained during all his professional career. Antonio Martínez Cascales is in the O2 Arena to support coaches and players of the academy.

This has been a great year for the academy, Top10 for Pablo, Zverev working hard with Juan Carlos…Has it been a surprise for you? Or, did you expect that could happen?

The academy is working hard day a day, for over 20 years, to achieve the best results. We should keep in mind that Juan Carlos reached World No.1 training here, and we have had some other Top10 players. There are not the firsts and also there won’t be the lasts. We will keep working to make it happen.

Pablo is debuting next Wednesday against Thiem. Zverev could win in his debut….Do you think Pablo could win too?

It is a prize for Pablo to be able to attend this prestigious tournament, so he has to be ambitious. This year he has played against Thiem and Dimitrov enjoying contrasting fortunes at each. I think he has a good chance but playing here is always difficult. He is facing two taught matches, but he is in the good level to win. 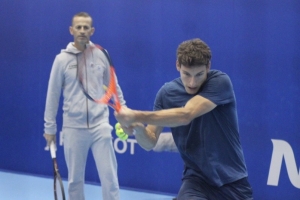 Zverev not only could win in his debut, but also could face Federer. He is playing against Sock to get a place in the semifinals…..How do you see that match?

This is a very equated match. Sock has shown a great level but if Sascha keeps his level during the whole match he will win. 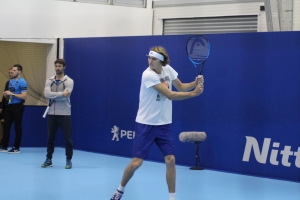 As a president of the Tennis Federation of the Comunidad Valenciana and first vice president of the Spanish Federation, we could say that your role as coach has been reduced, nevertheless you are here supporting the Carreño and Zverev coaches, Is it due to a less experience in this tournament?

Juan Carlos has got as much experience as me in these kind of situations, since he quitted playing has been linked to the academy practices. On the the hand, Samuel is working with us since the beginning and apart form Juan Carlos, he has worked with other Top players. But it is true, that I am here to support as much as I can but not because they need my help. I wish them and their players the best, and over all I would like they to enjoy this amazing event.