In a unique setting as the Catillo de Villena, the presentation of the two tournaments that will be hosted in the next two weeks by JC Ferrero-Equelite were conducted.

We have presented in a remarkable Catillo de Villena de la Atalaya, located on Villena, the two tournaments that will be hosted by JC Ferrero-Equelite Academy in the next two weeks. The XVII ITF Junior G1 Juan Carlos Ferrero that is an already well established and known tournament for meeting the most promising young tennis players around the world with the highest potential of future success. The Tournament has a reputation of being the best sub18 international tennis tournament hosted in Spain, and is a pioneering professional tournament in Spain. We have also presented the first edition of the Ferrero Challenger Open, which will host professional and elite tennis players around the world during the first week of April.

Antonio M. Cascales  mentioned that “This tournament is an exciting challenge, with the idea of securing the hosting of the tournament in the JC Ferrero-Equelite Academy and in the city of Villena” . Juan Carlos Ferror also highlighted the same point saying “this tournament is the return of professional tennis to the Valencian Community.” Among many elite players participating in the tournament we can mention the top international Spanish players such as Tommy Robredo Nicolás Almagro and Marcel Granollers representing Spain who were ranked top 5, top 10 and top 20 in the previous world ranking, respectively. Also Paolo Lorenzi and Roberto Carballés who are currently world´s top 55 and top 80 tennis players respectively, will be a starting the tournament by playing against the world’s greatest promises such as Felix Auger-Alissame and Alex De Miñaur, among other. In total 63 elite tennis players from Europ, South and North America will be participating in this year’s tournament, the majority representing Spain and Italy.

The presentation was attended by Miguel Díaz, president of the RFET, Francisco Javier Esquembre, mayor of the city of Villena as well as well-known people of the Valencian Community and Spain, among which main executives of the sponsoring companies such as RFET, Mapfre, Lavazza, Ambielectric, HEAD and Coca-Cola have stood up.

The presentation has had a great public atmosphere in which they have highlighted the organization of a charity dinner on Thursday 5th of April, and contributing 10% of the total tournament profit to the charity. Also the exhibition match between Juan Carlos Ferrero and Guillermo Gracia Lopez, was announced to be held on Monday 2nd of April at 11:30. 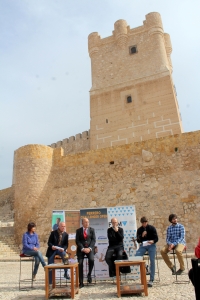 XVII ITF Junior G1 will be hosted from 25th of March to 1st of April 2018 and Ferrero Challenger Open will start in 31st of March and the final match is on 7th of April.